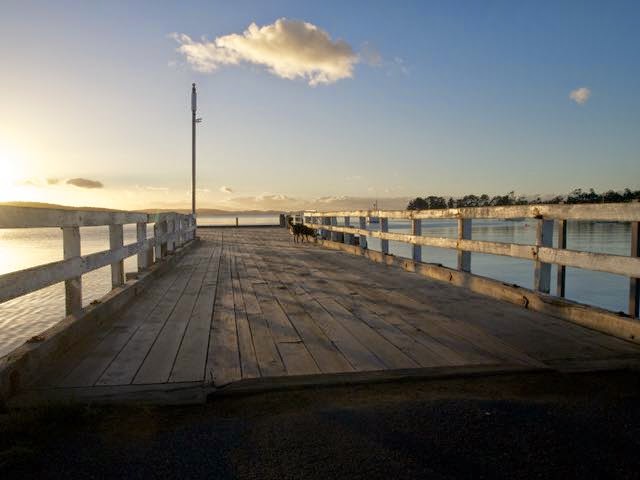 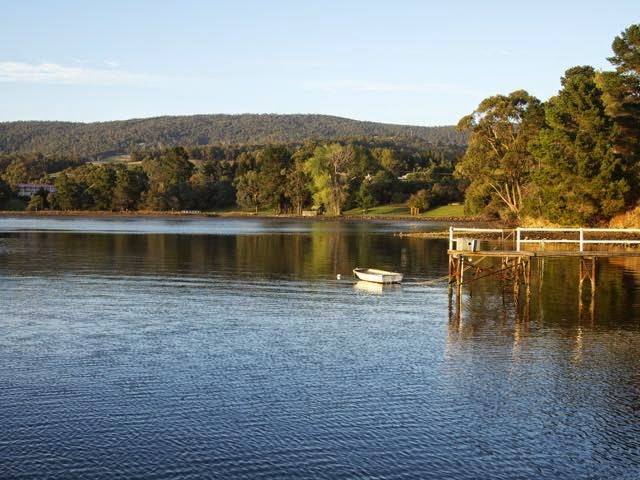 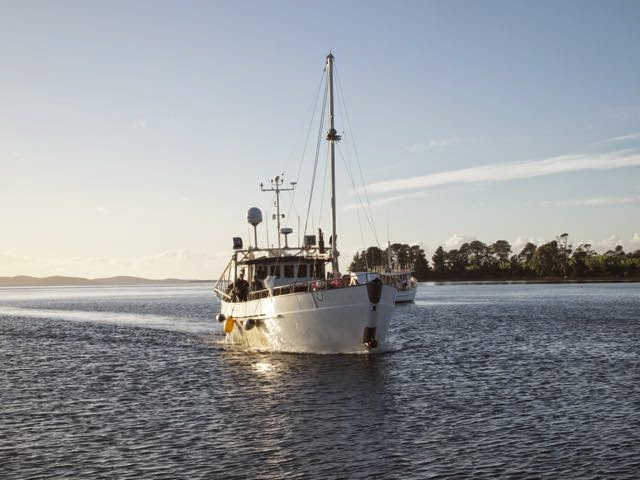 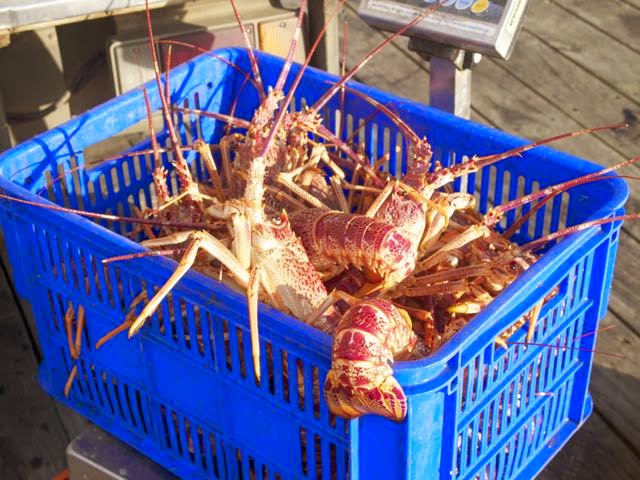 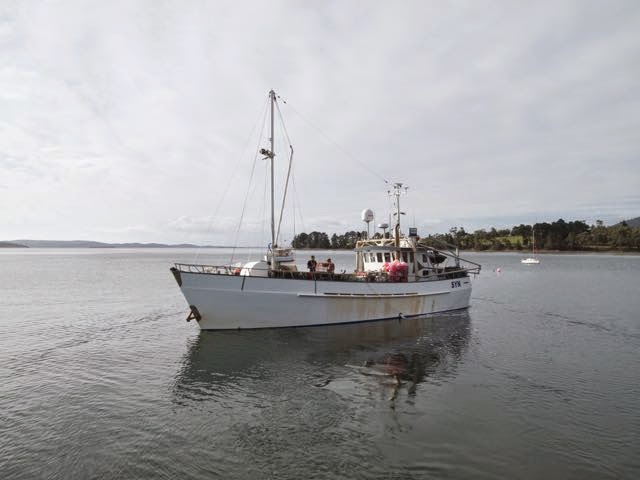 Posted by Annalise Rees at 11:38 No comments: 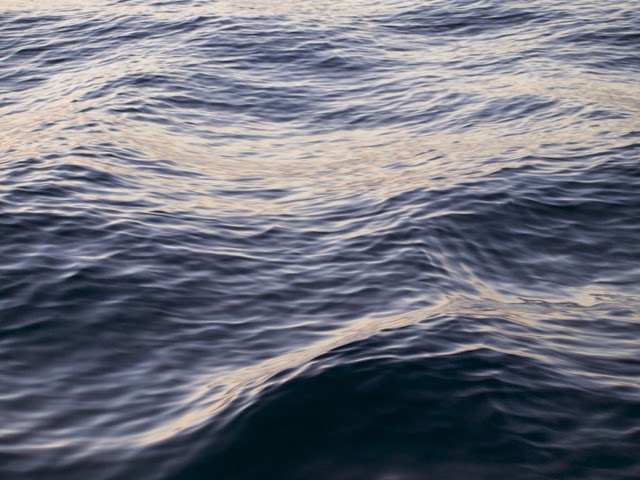 Peering over the side into the inky depths is at once tantalisingly inviting and also terrifying. The lure of the open water seems primal, instinctual. Despite the cool clime and my understanding of how cold the water would be, I still feel the urge to plunge and immerse myself, to break the surface. Bringing myself to actually do so however, would be an entirely different matter. Looking over the side into 40+ fathoms of water, being several kilometres off shore is even more of a deterrent than the estimated chill factor.

The “unknown-ness” of open water, the sea and the deep stirs up a fear and terror far more chilling than the 12-14 degrees of the Great Southern Ocean lapping Tasmania’s south-west coast.  As Jennifer Sigler writes, “I’m afraid of the ocean. And maybe I swim the way architects tend to think - in a language of measured perimeters, predefined routes, delimited territories. Again and Again, I approach the wall and turn, pushing off from the reliable edge.”⁠1 Pierre Belanger asked, "why…is land always expressed as an absolute shape - a figure situated in the void of “not land”? Why this insistent focus on the dry, when in fact, the wet world with which land lives is itself matter, and the boundaries between the two are dynamic and evolving?”⁠2

The sea has long been the element by which I have recognised both my connection and disconnection to the world around me. Growing up on an island, this dichotomous relationship of connection and separation has defined my entire being - in the sense of identifying myself and my place within the world at large.

Fluid, edgeless, fragile and yet powerful.
Impenentrable and immersive.

The watery borders marking my place and position have established a conscious awareness of the need to reach out, to encounter and to connect, but also the refuge of retreat and removal. The water, perhaps more so than land has always been an in-between space, one defined by its shifting, changing nature, by its lack of boundaries and yet a boundary none the less -  one requiring effort and action to overcome. I liken this watery ‘in-between-ness’ to the space of drawing, a zone connecting and separating me from the world and my perception of it. But then the edges of land are shifting, by their very nature and relationship with water and the sea and the earth does indeed spin and is certainly not immobile within the universe. 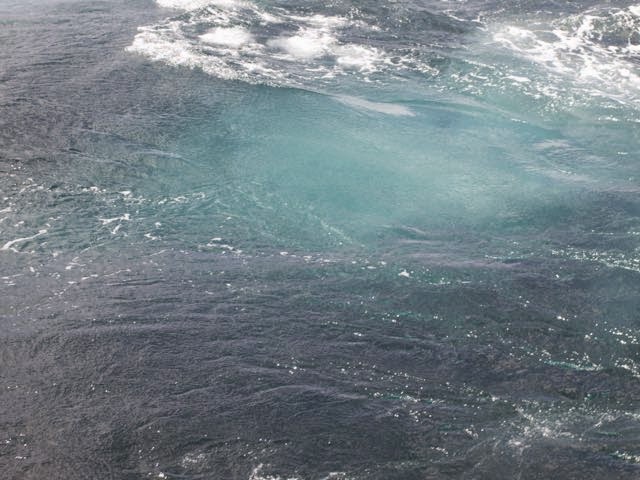 Journeying and ‘placing’ myself in unfamiliar and unknown territory has long been an interest, allowing me to continually search for myself and the world I inhabit. In this project I have longed for a place to situate myself to open up this searching, a place to lose and find myself. Going to sea has been a way in which I have been able to perpetuate the search, to be located, but continually on the move, necessitating an ongoing engagement with my surroundings and with that my contemplative self.

The unknown nature of the sea, its ‘in-between-ness’ and my constant movement in, on and within it have offered the perfect fluid state, site and non-site to be the perpetual explorer I so long to be.

“The lines here are invisible: latitudes, longitudes, or bearings projected from a compass setting a course. Like the lines of proportion, design, geometry and perspective that inform our visual systems, they are megastructures that exert their influence even when they cannot be seen.”(Kovats, Bradley & Fruit Market Gallery. 2014, p. 54) 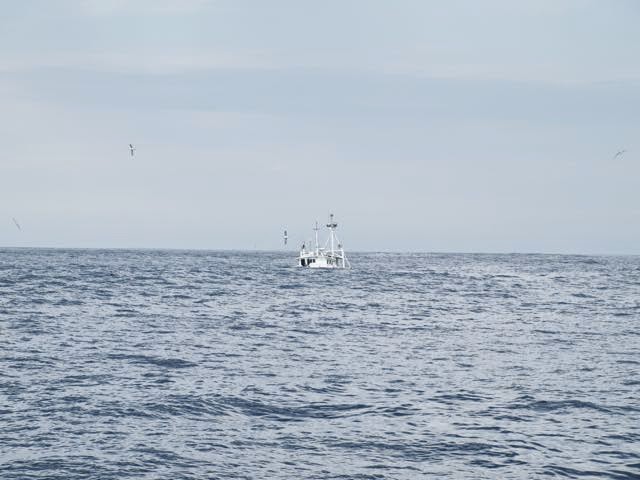 Why go to sea on a cray boat?

When I think about why I wanted to go to sea and ventured down to the waterfront in Hobart to see if there might be a skipper willing to take me out, I can answer quite plainly, in one regard and yet there is also part of me that can’t really name why. I felt the need to place myself in a position that was no longer grounded, stable. In a position where I was no longer safely nor comfortably situated within and upon the seemingly immobile land - where I am in control of where I am and where I am going. There was something about the disconnection, of departing from the shore, of drifting, floating and being subject to the whim of something, or perhaps someone other than myself - a letting go.

I find that drawing is a process of letting go, it’s about placing myself in a tenuous position of trying to decipher, decode and understand myself in my place of being - of understanding myself by where I am and where I am not. Not just geographically or physically speaking, although consideration of physical presence/absence is an element, but also in terms of thinking, of conceptualising, of being between the known and the unknown.

Drawing for me is not a system, but rather a strategy, it is a place where I can speculate, formulate and re-formulate. It’s where I am able to ask questions without needing to know definite answers. It is a place of freedom and disquiet. Through drawing I can test my ‘being’ in the world, not only to prove my existence, but also to question it. It is my place of suspended belief where I live simultaneously inside and outside my head.

This is a state I think we all actively participate in, every day as we draw ourselves into and out of the world, through a variety of activities, including shooting and pulling cray pots. It is a process of extraction and projection - a mapping or drawing of the self. Tania Kovats speaks of this; “sometimes when you pick up a pencil all you do is prove you are here. Understanding the self is like trying to hold water in your hands. With each drawing I make, each work, or piece of writing, I am searching for a better vessel of containment.”⁠3

Drawing is a heated dialogue between delineation and mystery, between definition and openness. It is a process of being in and out of one’s body of operating both inside and outside of the frame and of utilising and also challenging systems of knowledge. James Hamilton-Paterson talks about, “a particular way of being in a landscape, of coexisting with ocean and land which takes account of minutiae we no longer know how to observe and maybe now cannot see at all.”⁠4 He suggests that a “precise local eye” provides an intimate knowledge and understanding, specifically making reference to nomads, pirates and smugglers - individuals whose existence is defined by the indefinable, by edgeless boundaries and blurred lines. Drawing offers opportunity to scrutinise and develop a keen local eye, one that is aware of one’s place within competing and conflicting contexts. 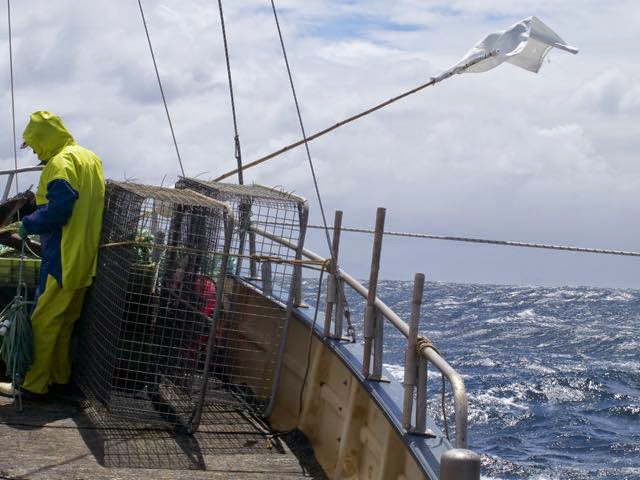 “The best place of space is its border…to look at something, one distances the thing from the eyes. To see space better, to photograph it, one always ends up in the corner of a room, stuck to the walls. And it is from this extreme position and found in the end at the limits of space that the point of view seems to us most often the most right, corresponding to our first apprehension of space. From whence comes the fact that space may be seen from its borders. The best place in space is not the centre. The best place of space is its edge.”(Tuerlinckx 2006, p. 177) 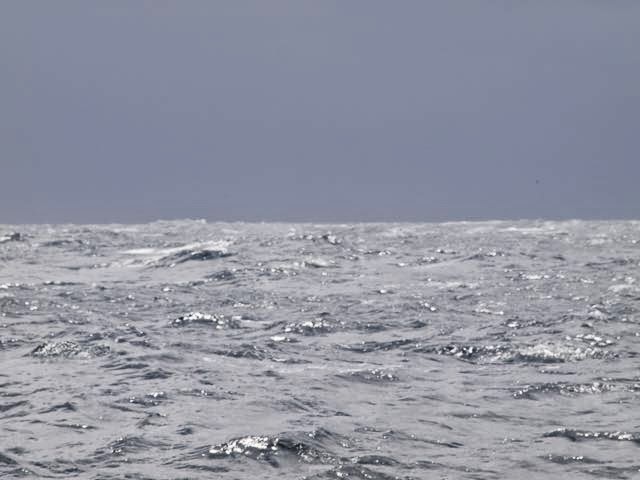 Being on the cray boat placed me in the physical border of the sea, but this space while being a border it is also a zone, a region of its own and thus it was impossible for me to place myself at its edge (like the corner of the room that Tuerlinckx speaks of above),  such a notion of an edge only applies to being on land.

The oceanographer Dawn Wright in conversation with Xiaowei Wang talks about the differentiation of sea and land borders, “correspondence on land is a bit more straightforward because boundaries are static. Oceans are different because they are constantly in motion and the ‘boundary line’ is three dimensional.”⁠5

“Ocean boundaries can be difficult to understand and enforce, because they extend down from the sea surface to the sea floor, forming a three dimensional volume. On land, a boundary is defined with a distinct line on a map and in some places a visible property division. But with marine spatial planning, maps typically show boundaries only at the ocean surface or the shoreline in two dimensions rather than three. People rarely think about space or property in terms of volume, but that’s the reality of oceans.”⁠6 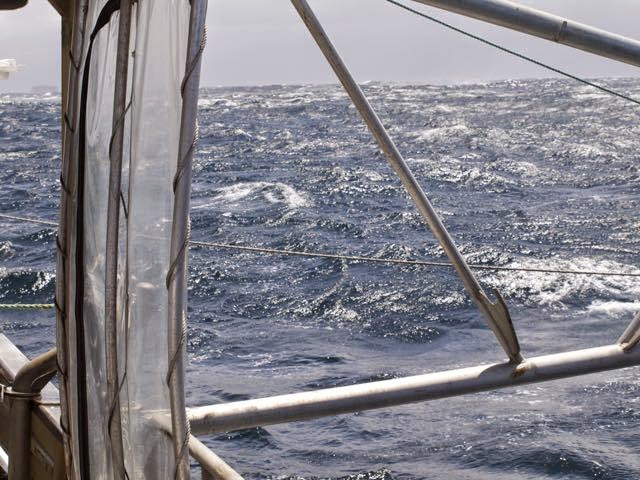 I was curious to see if my ideas about the unknown, error and drawing as a process of negotiation and orientation had ‘real world’ application. To see if these ideas and speculations were grounded in practice outside of the visual arts and that of an artist. To see if these ruminations were in fact simply ‘human’ processes and practice. I want my propositions to have resonance, relevance and relation to everyday activities. It was my hope to find evidence of these seemingly poetic ways of thinking and looking at the world and describing experience present within the everyday, not just within the practice and ponderings of an artist.

In my conversations with the skipper and deckhands I found my suspicions substantiated; in their process of trial and error, in their method of shooting pots, testing possibilities, working with and responding to the immediate conditions at hand, but also using historical and prior experience to inform the decision making process. All of this in conjunction with the drawing tools and aids of the GPS plotter, echo sounder and three-dimensional mapping visualisation software. It was through a translative and negotiation process that the skipper drew his pots into and out of the sea. 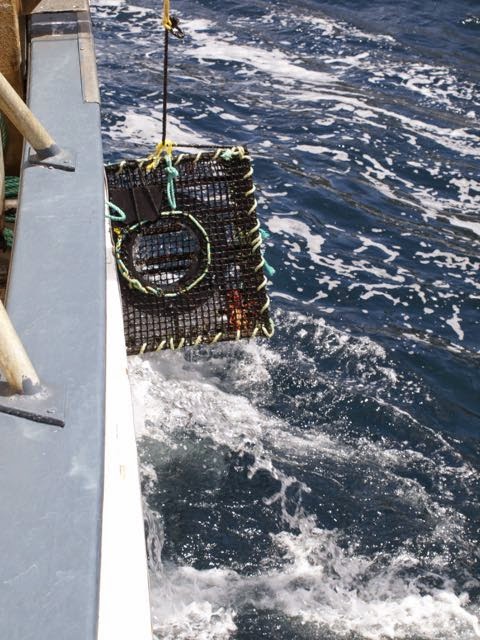 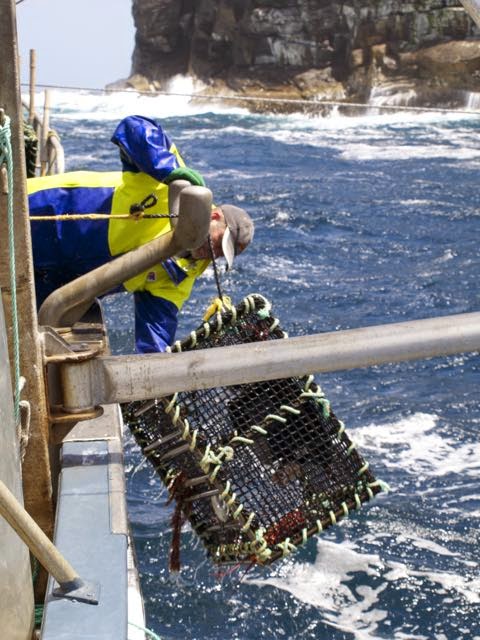 Randall spoke about the inductive process used when shooting pots, of trying to cover all bases in the most efficient way possible, to result in the most rewarding catch. The reading and interpretation of information in multiple formats and combining this into ‘one’ working image, a ‘constructed reality’ upon which to base decisions was incredibly exciting and affirming to witness. The three-dimensional mapping software, echo sounder and GPS plotter effectively ‘construct’ a reality of the sea floor, of the underwater environment. In addition to this there is the above surface knowledge, gained through observation of the weather conditions, tides and currents and a memory bank of underwater observations gained through his experience of diving. This picture of the unknown comes through transmission of drawing based systems and embodied experience. Most importantly it is not an image with clear or defined boundaries, but an edge like a sea fog creeping in across a surface that reveals and conceals, of brief clarity as multiple elements drift in and out of focus.

I am likening the process of shooting pots to drawing - ‘shooting the unknown/drawing the unseen,’ plotting and traversing a region by reference points based on prior knowledge and the integration of other systems and notation methods that inform knowledge gathering/gaining. Drawing is about breaching the surface.  The boat works across the horizontal plane, the addition and subtraction of shooting and collecting pots is a process of breaching - pots pierce the picture plane and plunge into the abysmal space. This space is ‘constructed’ via the descriptive systems of the 3D mapping software and echo sounder, which combined produce and illusionary ‘image’ of the unseen. They formulate an unknown through a process of surveying to establish a  multidimensional field/context, not a mono-dimensional ground.

Posted by Annalise Rees at 11:01 No comments: