Islands: somewhere between here and there....

It's been a few weeks now since I have returned from my trip to Heard and McDonald Islands. It has taken some time to adjust back to my land lubbing life after 2 months at sea. There were several days of landsickness, paired with a general feeling of disorientation as I tried to get back into my 'normal' schedule and routine.

In the days since my return I have been thinking about the nature of islands and their influence upon my world perception. I have also been thinking about my trip, which was a voyage to somewhere that was neither here nor there. It was a trip to a place I never set foot on, but instead circled round for days. It was a journey that was about the journey itself, rather than a fixed destination of sorts. There are not many opportunities that put so much effort into going somewhere and yet never actually getting there, in the grounded or 'landed' sense. It is something peculiar to the sea - a placeless place where you are perpetually mobile and never in any one fixed location, locatable and yet moving. I liken this to the creative process. It is about searching and journeying, rather than the destination. Below are some of my journal sketches from the trip. They are ponderings, they are me thinking out loud on the page. Through drawing I was trying to make sense of the experience of encounter with the unknown and unfamiliar.

Islands are vantage points, spaces for reflecting back and distancing ourselves. They possess significant geographical features that determine and influence experience. Islands are defined by their sea-bound borders, by distance and isolation. They lie off mainland shores, independently other. To be an ‘islander’, is to be someone who is acutely aware of both belonging and being separated, of connection and disconnection. It is a fluctuating perception of one’s place in the world, one that is largely determined by a very specific type of spatial awareness and physical geography.

Australia is the world’s island continent, another here or perhaps there, depending upon where you position yourself and from where you come. Positioning oneself is difficult, in the fixed sense. Position suggests being motionless, steady and unmoving. Alternatively, thinking of it as an active process, as something that you continually do while always being aware of relation, it is more of a becoming.  Rather than being a specific location, it is a continuum where you are never quite here nor there. Ross Gibson writes about Australian existence as being provisional, fluid and changeful.

As the decades have accrued…the colonial fixity has never fully gelled. For even though the land itself seems to be the rock-solid basis of Australian experience, the defining quality here is actually changefulness. There’s a motility in Australia – something skittish, relational and ever-altering – which means long-term inhabitants should expect only occasional moments of poise while remaining always engaged in jostling contingency and fragility. History teaches that to live well here, you need to be scanning close and far, catching environmental instructions, ready to respond when each emerging moment brings a new pulse of threats and chances. This requires a mentality that is attentive to the environment but not deeply embedded in any one locked and landed portion of it (Gibson 2013, p. 259).

Gibson makes an interesting observation regarding the culturally inherited nature of perception and its relation to identity as being spatially oriented. He writes of the ‘improvisatory, opportunistic and weather-guided’ indigenes (Gibson 2013, p. 259). Theirs is a fluid and responsive connection to country enacted through daily practice and ritual. Theirs is an existence dependent upon the ability to dynamically re-articulate one’s movements and practices in relation to an immediacy of being in country.  This is in contrast to the fixity of a rigid colonial vision of settlement. It was a perception that settlement would be permanent. It was an assumed certainty of stasis that disregarded the protean nature of the antipodes, of an island of ever-altering unpredictability and changefulness.

As pointed out by Gibson, Australian colonial history is not only a story of the desire for stability but also one of departures and arrivals. It has never truly been embedded in the land itself. Perhaps it is because of its displaced and mobile history that stasis and settlement were so longer for. He reminds us that Australia’s colonial history is also a maritime one, one of shifting horizons  of people’s from near and far, from here and there (Gibson 2012, pp. 231-232). Contemporarily Australia is an island of migration, of coming to and leaving from. I wonder if it is indeed the sea that surrounds which defines antipodean existence? The ocean that separates also connects. The watery void between becomes an active space that surrounds and necessitates negotiation. To leave (or arrive) one has to pass over and through. Duration and the journey itself are inherent characteristics of land girt by sea. Gibson writes further in relation to the work of Australian artist Simryn Gill,

…to be Australian might have less to do with being in a place than it has to do with being in temporal patterns of movement, being in rhythms of gleaming realization, being in glimpsed insights and occluding befuddlements, in a continual process of reorientation, action and reaction. Gill helps us sense how being Australian might actually mean being untethered or placeless. It might mean being blithely restless within the changefulness that the nation offers its citizens, which means appreciating how to live in dynamic patterns of time rather than in native plots of place (Gibson 2013, p. 260).

This project has offered up a chance to consider the significance of the sea within my own personal story. What is this placeless place? How can I be located without being stationary? The sea is also a space that continues to harbour mysteries and the unknown - a novel idea within a world that is dominated by information, surveillance and knowing. We frequently steer away from such uncertain courses towards the safety and comfort of the known. To step into the ambiguous sea of unknowing is risky and de-stabilising. But perhaps it is where one needs to be willing to go. It is a necessary step towards making sense of one’s placelessness.  It is an alternative perception, to think of the fluid notion of uncertainty as a generative state of being. It is a way to consider its potential to facilitate new connections with the unfamiliar.

Within this project the unfamiliar has been a critical driver of curiosity and inquiry. It is something that has led me on a journey without a pre-empted end point. I have navigated shifting currents through rising and ebbing tides. The flotsam and jetsam of artistic endeavour have been my attempt to mark the journey and situate myself in a fluid world.

It is in this space between, the watery boundary, between here and there where this project is situated and with that myself. I am searching for a place that has no definite location. I have embarked upon an unending search, looking for my next point of trajectory, traverse and journey. Through the constant attempts to orientate myself I have sought momentary solitude treading water. Between the here and there offers a chance to stop momentarily, to breathe and look around. The unknown presents a place to pause, to be in the moment and critically mindful of my surroundings. The unknown enables the perpetual search, and with it an acceptance that contexts, frameworks and knowing are (and should be) under constant review-edit-rewrite, or in my case, re-draw.

Over the course of the journey I became most interested in the human element within the encounter. The relationships between scientists, crew, ship and the environment began to feature in my drawings, strange interactions that help to build some kind of understanding of humans and the world they inhabit. 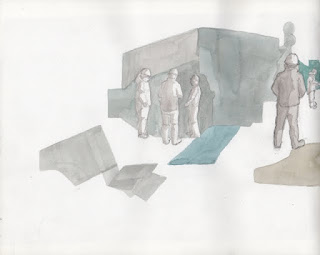 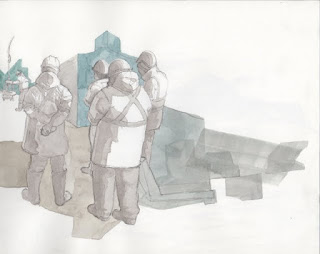 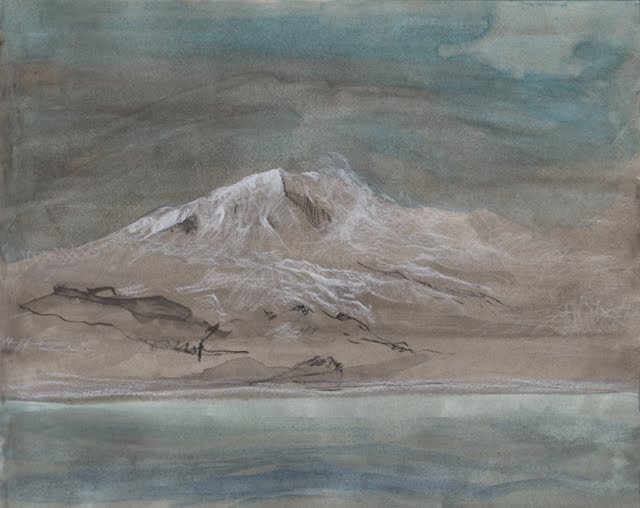 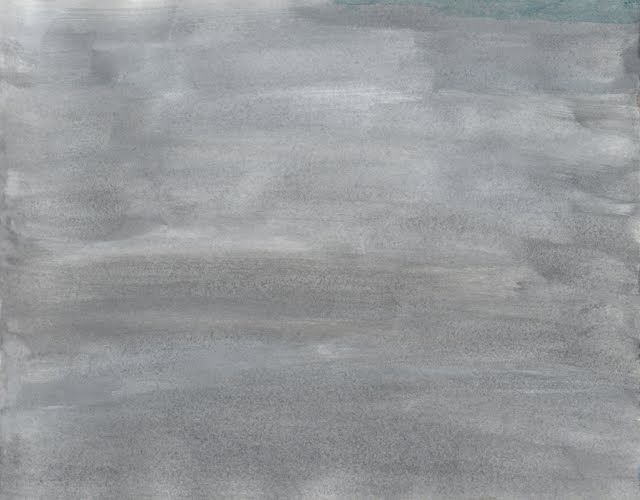 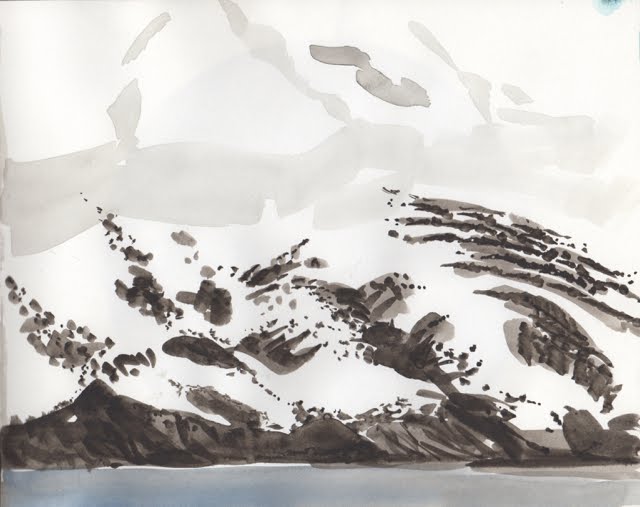 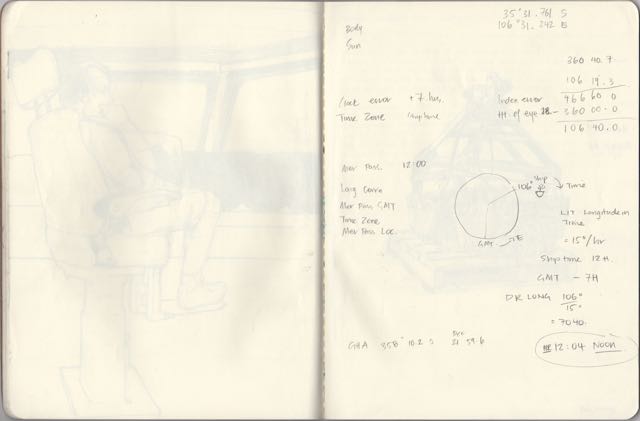 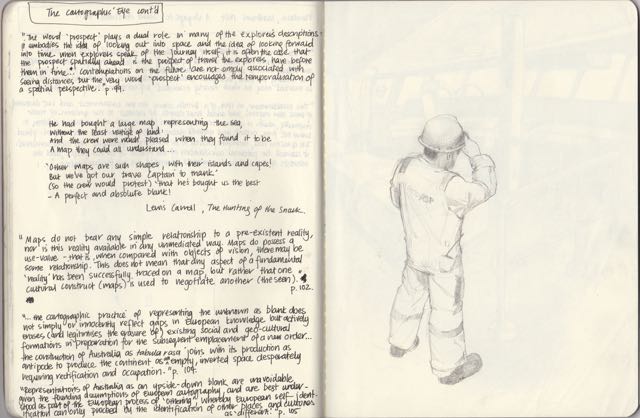 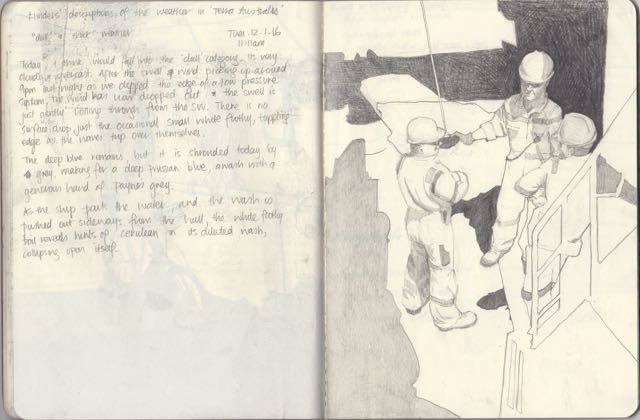 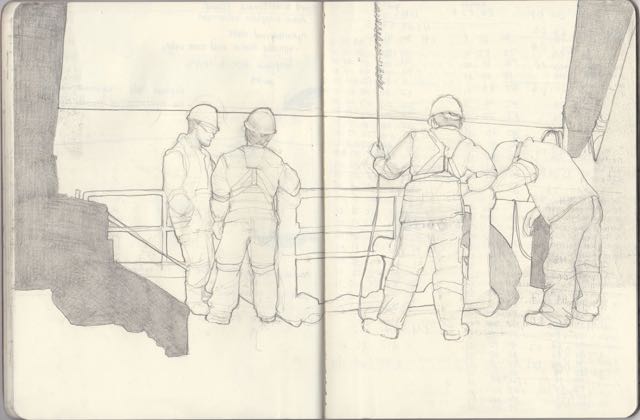 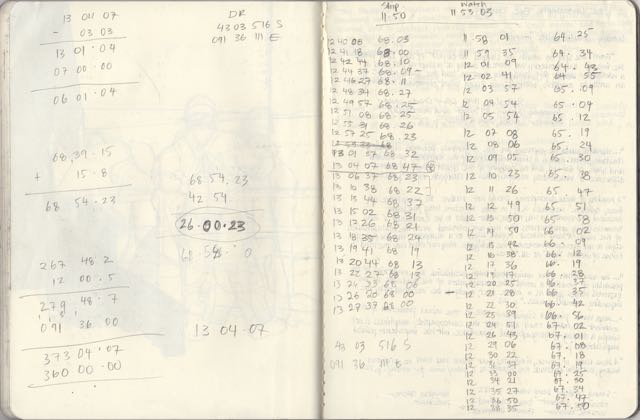 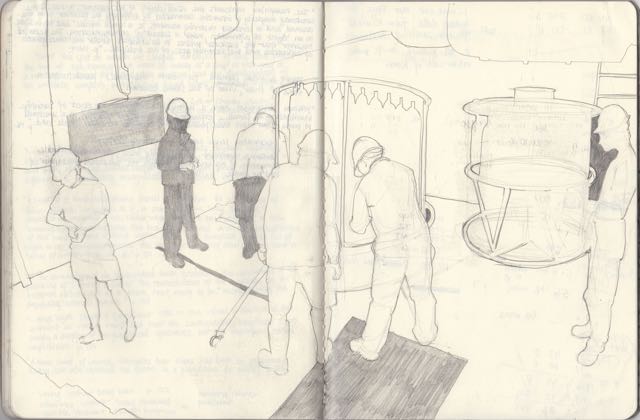 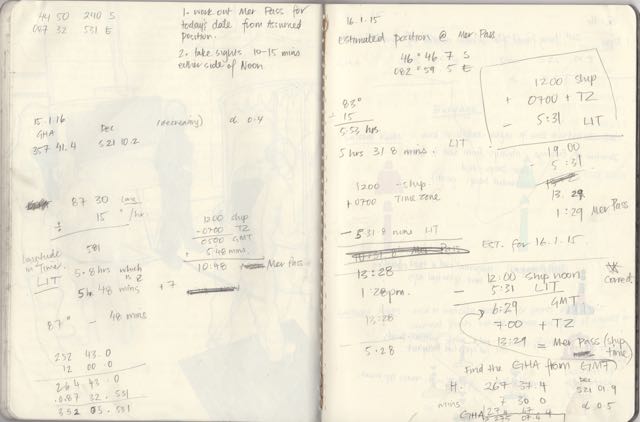 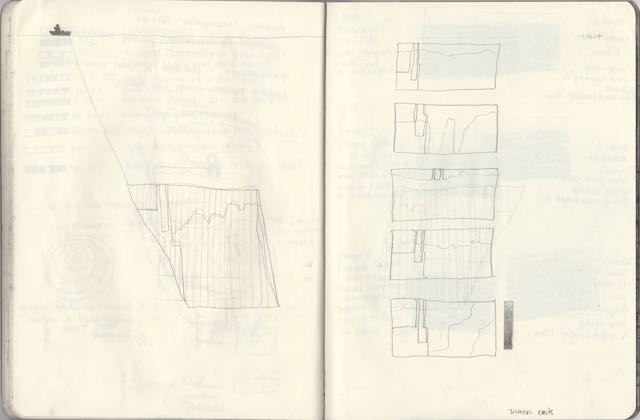 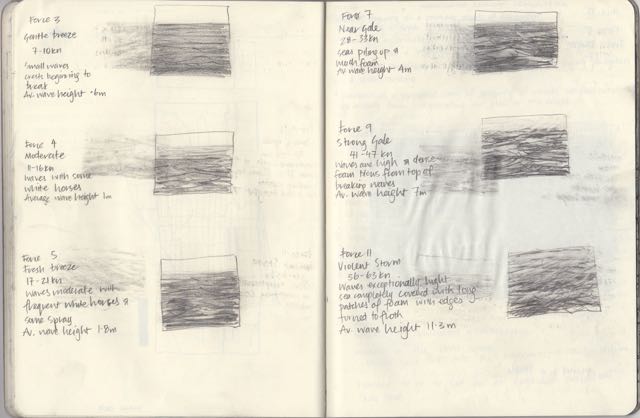 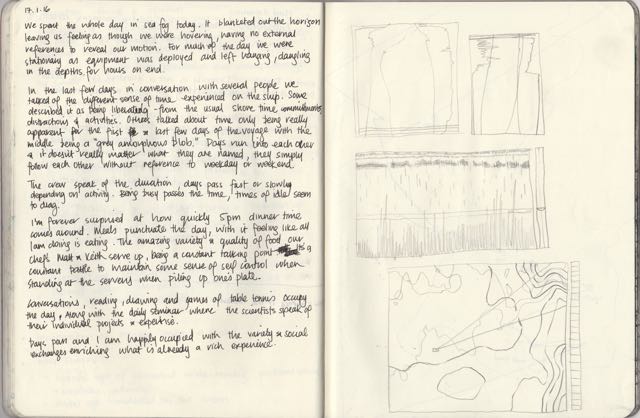 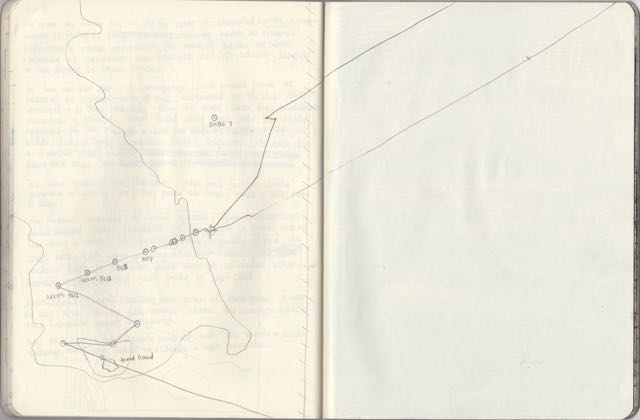 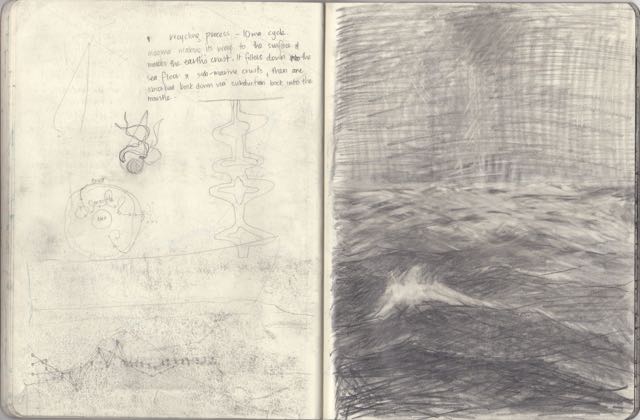 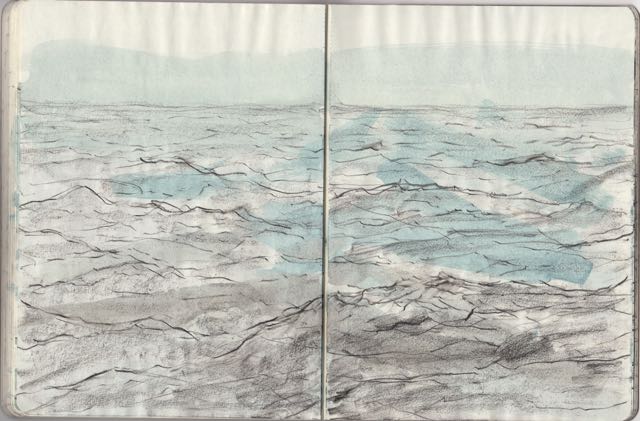 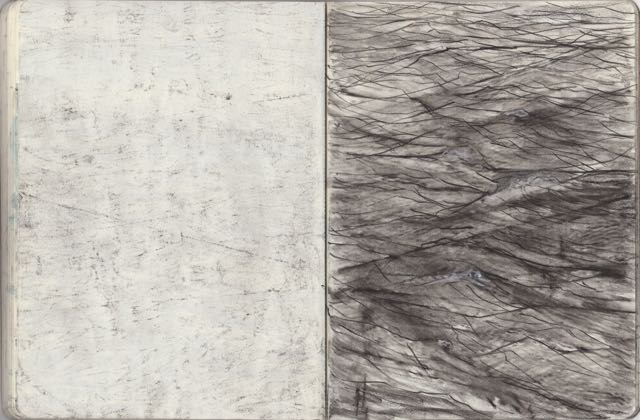 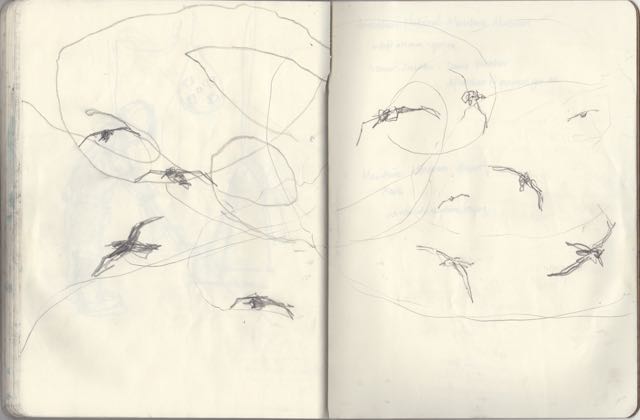 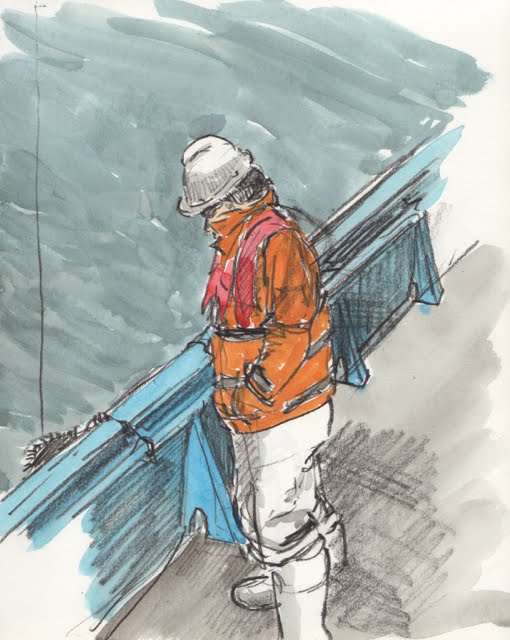 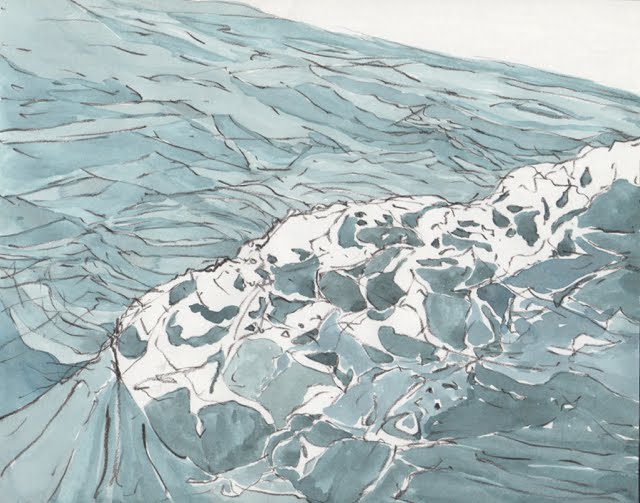 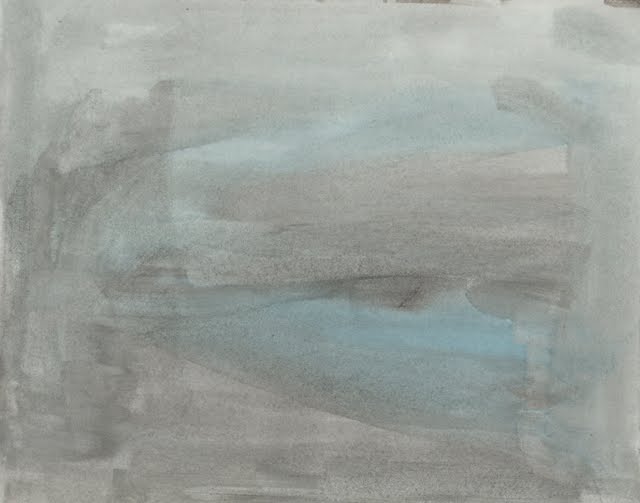 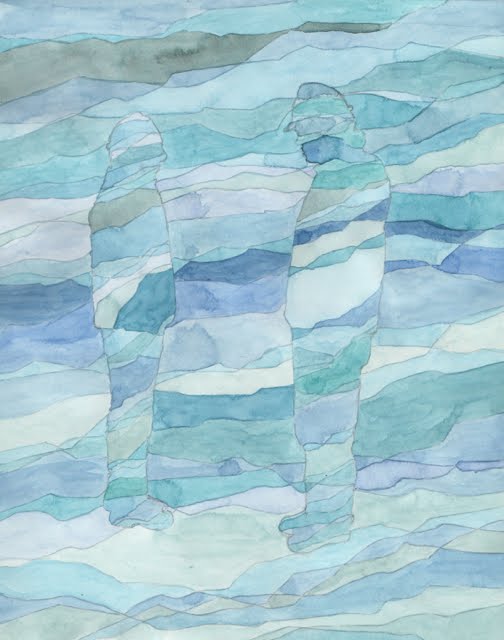 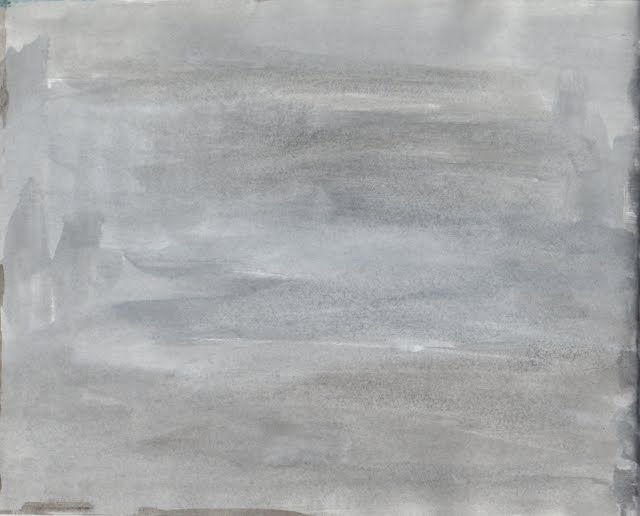 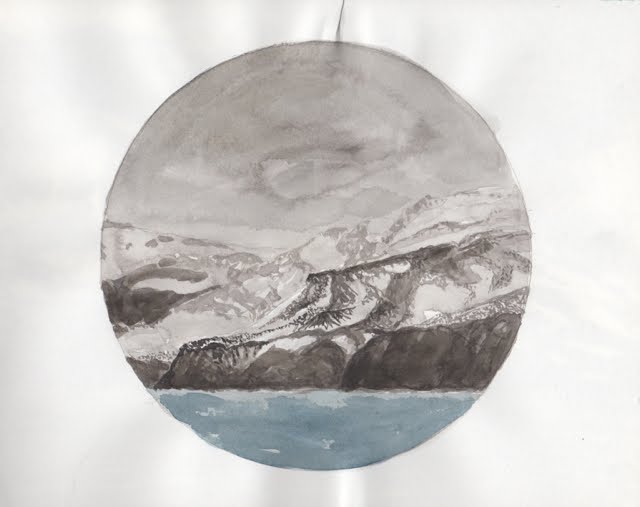 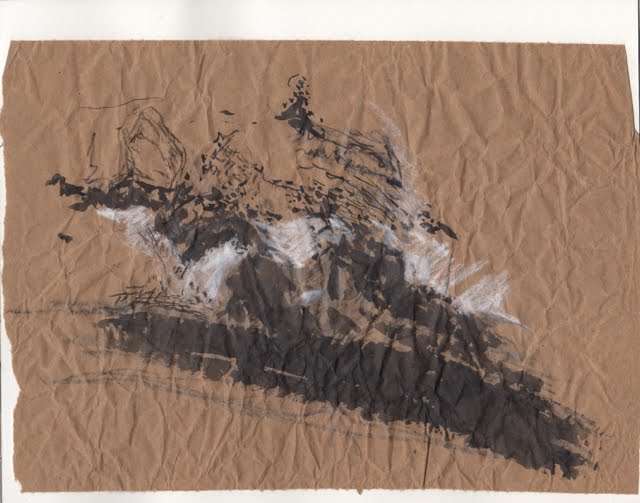 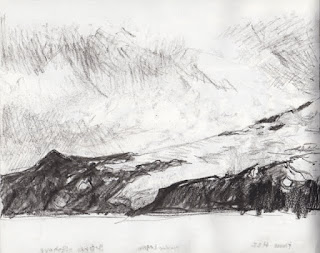 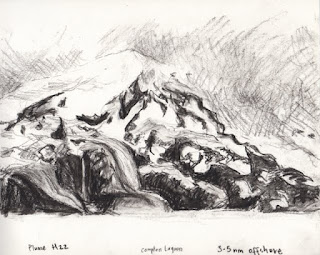 Posted by Annalise Rees at 16:33 No comments: